Our spotlighted brand this month is Newton House Gin, not only because they are situated close to my hometown of Sherborne in Dorset but because the gin, they have produced is so wonderfully individual, flavoursome and utterly delicious. Newton House first formally introduced the world to its gin in early 2017 and since then, has gone from strength to strength. 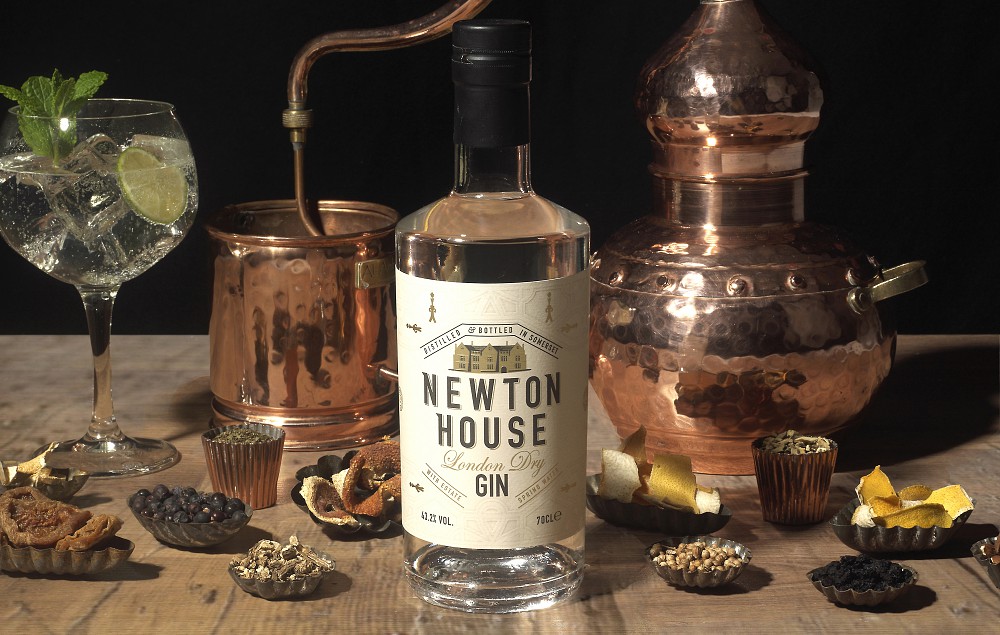 The way in which I would describe this brand is characteristically British, in terms of its origin, branding, packaging and taste, all reminiscent of the typical chocolate box England we know and love.

The title for the gin, derives from the name of the manor house, which had fallen into disrepair by the time it was taken on by Robin and Jane Cannon in 2007.

Newton House is Jacobean Manor House that was originally built between the years 1608 and 1612 and lies in a quiet valley on the outskirts of Yeovil in Somerset.

The house formed the centre piece of a very large estate known as Newton Surmaville, named after a French family, the de Salmonvilles from a small village near Rouen, who first built a mediaeval house on the site where the current house now stands. A very wealthy local merchant named Robert Harbin built the house and successive generations of the family enjoyed the property for 399 years, until following the death of Sophie Rawlins (nee. Sophie Wyndham Bates Harbin), the house was sold for the first time in its history, in 2007.

It was at this time that Robin and Jane took on the enormous challenge of renovating this gorgeous house along with its gardens back to its former glory.

Sixty acres were purchased with the house, forty in Somerset and twenty acres on the other side of the river, in Dorset. The enormous restoration project of both Newton House and the magnificent gardens are finally now complete.

When George Harbin inherited the estate back in 1820, he set right to work on the land, planting cider apple orchards and all the trimmings with equipment used for apple pressing, and barrel making. A kitchen garden had also once been in full use and it was the goal of both Robin and Jane to plant as much as possible that would have traditionally been grown and used during the glory days.

It was only when the couple were conjuring ideas as to the use of the outhouses, that they decided to create their own Gin. With all the facilities and ingredients readily available within their grounds, it did not seem like an altogether bad idea. After six very long and hard months of experimentation, the Cannon’s finally found a recipe that they were pleased with, whilst carefully considering their aim of producing a gin that would match the place in which it was born; a quintessential English paradise.

The gin is distilled in a London Dry style, with all 12 ingredients added in the pot for distillation.

Five of the ingredients used to create Newton House Gin are inspired by the garden.

The overall and long-lasting taste is that of clean and zesty citrus fruits with underlying notes of mint and peppery spice. This is further softened by the peach and blueberries. Just delicious!

It is highly recommended to fill a wide-mouthed glass with ice, add a slice of lime, 25ml of Newton House Gin and 100ml of Tonic Water. Stir with a swizzle stick and garnish with a lightly bruised mint leaf.

It has been wonderful to taste and absorb the history that has gone into this delectable gin. With a profile so tasty that is set in a distillery so inspirational, this was always going to be a gin that touched hearts.

We believe this is a gin that you should unquestionably go out of your way to get hold of!

We offer Newton House Gin in a 70cl bottle or a 5cl miniature. Please see our price list or contact us for more details!